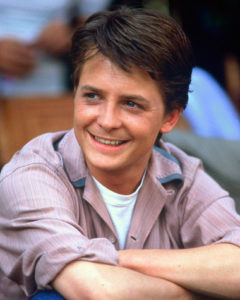 It’s fall in Oregon, which means we’ll get beautiful, crisp mornings and brilliant colors. You can watch nature in progress over at the Owen Rose Garden webcam. I, of course, am not thinking about nature at all. No, I’m thinking about Back to the Future, as one does. More specifically, I’m thinking about Marty McFly and the character arc he takes through the first BTTF movie. There’s a stack of things you can learn about scifi character development by Marty McFly in Back to the Future. In fact, he can help you write better characters.

So to recap, Marty McFly is a teen living somewhere in suburban California in 1985. He has a single friend, a local ‘mad scientist’ who engages in eccentric science projects like synchronizing all of his clocks and building the world’s biggest guitar amp. We quickly find out that Doc Brown has invented a working time machine, and Marty ends up using it to travel back in time.

He quickly finds himself stuck in the world of his parents, now teenagers, and ends up potentially creating an alternate reality where he is never born. With the help of his now-younger friend Doc Brown, Marty manages to undo the time paradox, fix his powerless time machine and return to the restored world of 1985. Along the way, he manages to fix his broken family, and that’s where the magic happens in terms of Marty’s character.

The What of the Arc

At the beginning of the story, we see Marty as a character in crisis. His family is a mess, his school is a wasteland, and his community is on the decline. In short, Marty is a young person with no tools or support structure with which to build his life and is on the bubble between success and failure. Although he’s talented, he has no success in his talent. He has a girlfriend, but circumstances keep them from enjoying more time together.

So Gale and Zemeckis are doing something smart here. As the screenwriters, they spend the first ten or twenty minutes of the movie showing us how miserable Marty McFly’s life is. By the end of Act One then, we’re rooting for him. That’s a successful demonstration of the First Rule of Pixar Storytelling – You admire a character more for trying than for their successes. 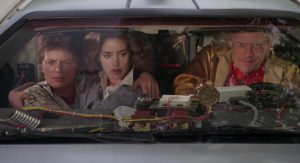 Then, the story builds: there’s a conflict in the first act of Back to the Future that we want to see resolved, even if we don’t know it. What’s Marty going to do about his broken family? Without realizing it, we relate to Marty McFly because we all have a broken family, we all feel misunderstood, we all feel frustrated and stressed out when we’re seventeen and getting our start in the world.

The How of the Arc

Gale and Zemeckis understand and respect this. This is why go out of their way to resolve the two major conflicts of the story – getting back to 1985 and undoing the time paradox – in a way that resolve this unspoken conflict. They could have easily shoehorned a lame moral at the end of the story – “well gee, we couldn’t fix everything but now Marty has a new perspective on life that will help him see everything is okay” – but they don’t. No, they set up an emotional problem and then fix it for us. 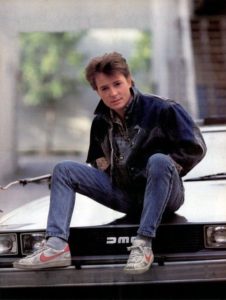 This successful character arc is why we cheered by the time we saw the flying DeLorean. This is why we still giggle whenever someone says “Hello, Mcfly? Anybody home?” That’s why we still love Back to the Future thirty-four years later. This is why the entire franchise was successful, even if I find Two and Three a little hard to watch now. There was a character arc happening in the first movie that really helped us connect emotionally to the story.

The Why of the Arc

Maybe it’s the old man in me talking, but I don’t see that emotional resonance happening in modern scifi. Perhaps I’m wrong and I need to sit down and watch Maze Runner again, but honestly it wasn’t there for me. Character arcs, where you really see a person grow and change throughout the world of the story, are something I feel strongly about.

My hope is that the arc of Roman in Mesh hits people like Marty and Doc Brown did. I’m getting good feedback that says people *do* relate to Roman. Hopefully everyone else feels the same way; that’s how we’ll know Mesh found its audience.

The main takeaway? Marty McFly is a character that the reader or audience can relate to. Your characters should be, too. In order to do that, think about what your reader is thinking and feeling. What do they want, love, and hate? What problems in their live do they want to solve?

If you can have that clearly in mind as you tell your story, that’s a good thing. Even if it doesn’t solve every problem, it will go a long way in connecting with your readers’ heart. I hope you found this helpful, and I’m going to be using these insights in the future stories I tell.