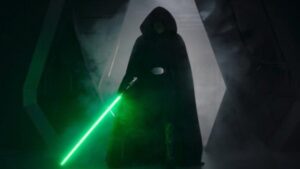 Know how they say ‘there’s no wrong way to eat a Reeese’s peanut butter cup?” Yeah, when it comes to Star Wars it turns out, there is a wrong way. I’ll explain:

A news article caught my attention last week, but I held off on commenting about it here. At first I thought it was a ‘toxic fan’ issue but I was wrong. Later, I saw another article and everything made sense. When it comes to Star Wars, there’s a wrong way do things. Lucasfilm exec Pablo Hidalgo did Star Wars proved that point. But then our hero Mark “Luke Skywalker Hamill showed us how to ‘Star Wars right.’ Let’s discuss what that means for scifi in general.

[Spoiler Alert] Luke Skywalker shows up at the end of The Mandalorian Season 2. NGL, I screamed like a little kid when this happened. Other fans, like Youtuber ‘Toos,’ got a little emotional. Online, Lucasfilm exec Pablo Hidalgo was less than sympathetic and an online backlash ensued.

The hero of the story, like the hero of the last episode of Mandalorian Season 2, was Mark Hamill. Rather than publicly siding with Toos or Hidalgo, Hamill simply expressed his appreciation for the fan love of his digital appearance in the show. On Twitter, he had a reaction to the episode that not only encompassed the moment but also his feelings for his relationship with the Star Wars universe itself:

Sometimes the greatest gifts are the most unexpected and something you never realized you wanted until it was given.#ThankYouJonAndDave 🙏 pic.twitter.com/4nNjSvbvIN

I’m sure Lucasfilm and Disney had a ‘Monday morning meeting,’ about the whole experience. What it (hopefully) taught them is that Star Wars is much more than a franchise to some people. Is that right? Is that wrong? That’s not for me to say.

What I can say is this: “Know what you’re messing with when you mess with it.” Hidalgo certainly didn’t expect the reaction he got, but if he thought it through a bit maybe he should have. If you can make a career out of loving something, it stands to reason that people have very strong opinions about it. Dropping a verbal hand grenade into the chat, shaming people for acting like it shouldn’t matter after they built their life around how much it matters, was a bad idea. Now, everyone should know it.

Why does this matter?

Now look, I’ve said it before and I’ll say it again – you can love Star Wars, but remember that Star Wars does not love you. Some people are content with loving something that doesn’t love them back, but that’s their trip. For the rest of us, I want to use this as a teachable moment and here’s what it is:

In the grand scheme of things, I look at the Star Wars universe as a template for whatever happens to my books in the future. I’d love that level of success, but I don’t want it if it comes with snark. I’d hate to think that success would strip me of the wonder and joy of the universes I build. That’s what happened here – P.H. lost sight of the joy and the emotions. This why I’m watching how to ‘do Star Wars right’ when it comes to Mesh or any other project.

After all, you as the reader deserve it.