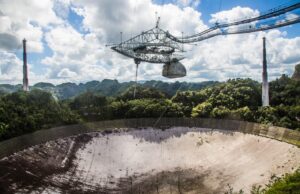 I’m happy to say the following: My SF novel – Project Arecibo – Now in progress. As most authors will tell you, you’re usually working on one novel, editing another, and promoting a third.

Where did I come up with the idea? The genesis of the story came from a random #MSWL tweet. An agent expressed interest in a story about the now-collapsed radio telescope:

The question was, why would teen explorers be looking at the bottom of a telescope? What would they find there? Answering those questions led to more questions. I took a bit of time to write out a synopsis as part of a mind-clearing end-of-the-year exercise. So while we wait to see what happens with Mesh, we’re hitting the gas on the next chunk of work.

Arecibo celebrates many different aspects of geek and nerd culture. One piece, for example, is about celebrating women technology pioneers like Grace Hopper. Another part is about SETI and outer space. When I’m done, the novel will be about telling a 21st Century ‘buried treasure’ story with its roots in outer space. Don’t worry if it that doesn’t make sense now, it will later on.