Star Trek – When Nerds Nerd Out 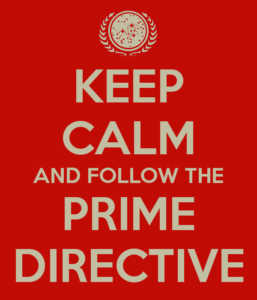 This /r/bestof post answered a question for me that I never knew I was asking: What *is* the Prime Directive? An anthropologist provides a detailed, nerdy answer and the results will totally blow your mind. No, I’m serious: prepare to have your melon bent. Here’s a quick preview:

“The problem here is that Star Trek, for as “enlightened” as it seems, essentially has adopted a 19th century perspective on social / cultural change, enhanced with some early 20th century Boasian concepts.

“The basic premise behind the Prime Directive is species have their own developmental trajectories, and that Starfleet / the Federation / other species shouldn’t interfere with that. So far so good. That’s moderately Boasian in its perspective.”

“[T]he idea of a society’s “natural development” is very much predicated on 19th century unilineal evolutionary ideas, that all societies develop along a single technological and social continuum. Even worse, the Federation and Starfleet enforce this by refusing planets’ admission to the organization if they don’t conform to certain criteria. And they use this as a bludgeon at times, as with the 3rd season episode, “The Hunted,” (https://en.wikipedia.org/wiki/The_Hunted_(Star_Trek:_The_Next_Generation)) in which a society seeking admission to the Federation is refused admission because, to human Captain Picard, their means of waging war (super soldiers who are not properly reintegrated into society after their usefulness is over) is not palatable. The implication is that societies must change if they want admission, which comes with huge economic and technological benefits.

“As one character remarked (in an episode I don’t recall, but I think it was DS9, and maybe Quark), “at least with the Borg, you know where you stand. The Federation does the same thing, but is far more insidious.”

“While we could argue that many of the Federation’s stipulations are reasonable, there’s a significant amount of ethnocentrism at play here. Earth / human morality and ethics are always treated as monolithic, and are also always (well, almost always) treated as the default.”

And believe me, this is the Cliff Notes version. Go finish reading this delightful, yet insightful discussion on alien contact. Your brain will dissolve into a chewy mouthful of scifi nerdery, and you’ll be a better person for it.

What Is the Prime Directive?