Let me tell you about what I learned a couple of years ago. Reddit didn’t enjoy my review of Passengers. I wasn’t surprised – I even predicted that it would happen. That moment, among many others, taught me that we’re approaching the sci-fi singularity. We should talk about what that means.

For as much as I enjoy the genre that incorporates science and technology into fiction, I’m constantly at loggerheads with the current ideology of the FS community. Movie X is ‘true sci-fi’ and Movie Y is not. Prepare for the hate of the Internet if you disagree.

For the record, this isn’t my first rodeo – I know walking into this that any science fiction book, movie or discussion is going to contain what I call the ‘sci-fi orthodoxy.’ Simply put, there’s a common social fallacy that states:

Forgive me for asking a potentially dumb question, but shouldn’t this scare us a little? This is really weird, polarizing behavior. As we come out of the COVID lockdown (Please God, please) we should talk about what SF will be when we go back to the movies.

This is supposed to be fun, right? Our devotion to science fiction has been what unites us. Now the community has become partisan, factional, and sectarian. It’ll be our epitaph if we do not choose a new future.

What is the Sci-Fi Singularity?

All of this tells me that we’re approaching what Patton Oswalt called in his remarkable prescience: the Etewaf singularity. Everything that ever was, available forever. Okatu has eaten itself. To paraphrase him: ‘Sci-fi has become overpopulated with the army of sated consumers, who cannot create anything new while there’s a mountain of freshly excavated pop culture to recut, repurpose, and manipulate.’ That’s the sci-fi singularity.

We’re so busy regurgitating the familiar, that we’re not tasting anything new. We’ve become those angry boomer parents who shout ‘why do you like those crazy Beatles? Lawrence Welk is on!’ We’ve become the same kind of bully we had in junior high, sneering: ‘Why do you like laser swords, we’re watching football!’ We’ve grown as a community, now it’s time to grow up.

If our present has taught us nothing else, it’s that organizations die when they reject their own own core principles. So be warned: There are no gatekeepers to science fiction. Frequently, the floor belongs to the person who shouts the loudest, and that’s a dangerous way to live. A couple of years ago, the Hugo Awards and Puppygate proved that anyone with an agenda or a grudge can burn the house down.

I’m not here to defend Passengers. I’m a storyteller, I’m trying to understand how it all works. But something’s missing here. Every discussion about why *this* story works and *that* story doesn’t is a zero-sum game and as far as I can tell, it’s nowhere.

What the Sci-Fi Singularity is Doing to Us 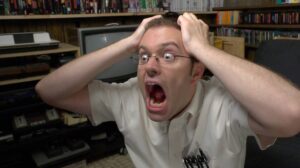 I stopped discussing sci-fi in general, because I know that I’ll encounter trust gaps, fundamental attribution errors, confirmation bias and other logical fallacies. We’re here to have fun, not to establish our bona fides as nerds, geeks or techie auteurs.

Nothing sucks the air out of the room faster than that guy who has to remind everyone that Star Wars is ‘really fantasy and not true sci-fi.’ He doesn’t understand, or believe, or admit publicly that he is, in fact, killing science fiction.

Everything that ever was, available forever. Geeks are know for what they buy, not for what they create. Your media consumption habit is your personality. I’m sick to death of geeks and nerds subjecting all sci-fi to a half-wit version of the Gom Jabbar Test.

Case in point – Passengers. Sure, it was ‘disappointing’ and ‘mediocre.’ Passengers ‘had too many cliches,’ and ‘not enough heart.’ So did Jurassic World. Paper-think characters, ridiculous premises and it raked in half-a-billion dollars. Jurassic World won for a very simple reason: the SF community was trained to love it. It’s a sequel, it’s got brand memory. Careful marketing to build on previous successes, it’s a slam dunk!

What We Should Have Done

Meanwhile, a movie attempting to innovate by telling an original, albeit familiar story, died a fiery death on Twitter. We could have changed that. Like Yoda, we have the power to lift the X-Wing out of the Swamp if we believe we can.

If we really cared about innovative, original SF we should have shot Passengers to Number One in the box office for a few weeks to make a point. ‘Yes,’ we should have said, ‘we like these kinds of stories. You’ll make money. Make more of them!’

We didn’t, and here’s what this means: Sci-fi is slowly killing itself. Forums and subreddits filled with ad populum arguments. Meanwhile, Hollywood laughs and plans another Spiderman reboot. They know our arguments only affect the outcome so much. “If many believe so, it is so.”

For professional movie promoters, this is a very simple equation. You know how it goes, right? ‘Throw enough money at the ad campaign! Astroturf the online discussions. Let the hype build of its own accord. By the time anyone figures the scam out, we’ll be rich!’

It works, too. We’ve seen that over and over again: bad movies, lame plots, tired sequels. The SF community has become Moff Tarkin; tightening it’s grip only to watch entire universes slip through their fingers.

What We Should Do

Grow up. Seriously, it’s that simple. If we don’t stop acting like kids, if we don’t grow up, we’re going to lose. Seriously. God forbid we find out what true science fiction is. If we do, we might discover that it’s more than binge-watching The Expanse or arguing about Sonic Screwdrivers on the Internet.

I have more thoughts on how this all works but this post has gone on long enough. Stand by for Part II. Let’s discuss how to dig ourselves out this hole.