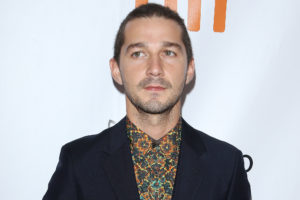 Look, you’ve heard what I’ve heard about Shia LaBeouf. I can’t tell you what’s going on in his head, or what his life is about. My job is to write stories, so I do. I do get tired of Internet memes, and if I were LaBeouf, I’d be sick and tired of the ones created about me. So, channeling that frustration, I responded to the following writing prompt: “You’re walking in the woods. There’s no one around and your phone is dead. Out of the corner of your eye you spot him…Shia LaBeouf.”

“Oh, man,” I said, pointing in horror. There he was, Shia LeBouf. Of course I’d heard the stories. Crazed drug frenzies. Wild fights in the streets. Fits of rage. How would I handle an encounter with … with, Shia??

Make no sudden moves, I tell myself. His eyes are attracted to movement. Whatever you do, don’t provoke him. You don’t know what he’s capable of! Too late, he’s seen me!

He’s seen me, he’s seen me! Visions of my bloodied corpse run through my head. My mom will be so sad. She’ll tell everyone, everyone, what a good kid I was. My friends will mourn my loss, game night won’t be the same without me. My neighbors will need someone else to take the trash out now. My boss, well, he won’t even show up to the funeral. Let’s be honest.

I muster up courage, and then say something back before his confusion can become rage. “Hello.”