Mesh Networking: How It Works 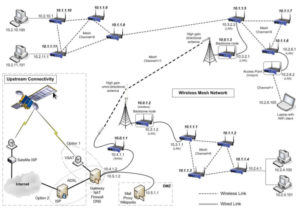 So yes, Mesh takes its name from ‘mesh networking.’ Non-nerdy types might immediately wonder after finishing the book, ‘is this real? Can a mesh work?’ The answer to both questions is yes – mesh networking is totally real and can totally work. Let’s talk about the why’s and how’s in a handy little format for future reference.

You’re used to seeing that in pictures of the Internet. Your computer or phone connects to a wireless router or network cable. From there, everything is routed and switched depending on what you want to do. This is all controlled, more or less, by specific organizations or companies with their own ideas of how a network is supposed to function (For example, AT&T, the FCC, or ICANN). With me so far? Okay.

Okay, now imagine that the Internet is broken. Or, you can’t use it, or you don’t want to use it. Does that mean your computer is useless? Of course not. It just means you can’t get to specific things that the Internet connects you to. You can still print, or transfer files back and forth between two computers on the sample simple network. Now imagine that everyone is in the same boat as you. They’ve got a small local network, but they can’t get to outside services like the Internet which means they’re disconnected from Twitter, Netflix or Google. What now?

This is where a mesh network comes in. A mesh can take advantage of the bluetooth or Wifi tech in your phone to broadcast info within a small range (100-200 meters). Each device then takes responsibility for being both the node, and the link at the same time. Put enough of these meshed devices together, and you’ve got a groovy little Internet of your own. No special tools, no crazy skills required.

People are already making use of mesh tech. Serval, and Firechat are both apps that exist to allow simple message and file transfer between anyone. Sonnet is working on their own mesh Wifi hot spots. We can expect more complex tools in the future.

In fact, Mesh networking can even work with old Ham radios. According to Offgridsurvival.com, ‘radio operators were using an internet of their own called Packet Radio. Packet Radio allows Hams to send files, update bulletin board systems, send text messages and even control remote systems and networks via their radios. Should some catastrophic event ever occur that takes out the internet, Packet Radio technology can still be used to link remote stations and form an ad hoc network — or emergency internet of sorts.’

So there you have it. Mesh is totally real, and totally do-able. The Internet has grown and changed over the years, with a view toward transparency and control. In Mesh, the kids decide find mesh networking to be a powerful weapon against the bad guys. It may be something you can find useful in your day-to-day life!