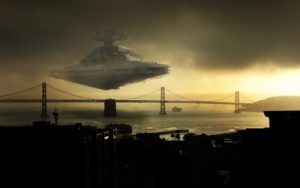 E.T.’s on Freeform right now and something occurred to me while watching: Eventually, the Empire is going to come and get us. Thanks a lot, Elliot.

Of course, everyone knows about the theories surrounding how E.T. connects us with the Star Wars universe. However, something deeper is at foot within the movie and I think we should be prepared to defend ourselves on the day the Dark Side comes to town.

In one of the early scenes of the movie, E.T. is introduced to Elliot’s world. Toys, food, clothes, and people. Elliot uses his toys to explain life on Planet Earth and E.T. patiently let’s him speak. What’s interesting about that moment is, many of his toys are from the Star Wars universe. E.T. doesn’t recognize them, but he does recognize Yoda and that forms the basis for most of the E.T./Star Wars connections.

Now the Empire, or the First Order – wherever we are in their timeline – are evil but they aren’t stupid. Wouldn’t you, as a defense analyst deeply concerned with the security of your civilization, want to know more about this planet that knows so much about you? One step further, if you were the Empire, what would stop you from simply attacking our planet as a preemptive strike?

Until we achieve multi-planet residency and interstellar travel, Earth should contemplate a realistic defense strategy against a hostile space-borne enemy. It’s imperative for the survival of our species, and for peace within our part of the galaxy.

Now, do I believe any of this? No, of course not. This little exercise is just a bit of fun, a bit of nerding out, even for a guy who’s completely over the Star Wars universe.