The news this morning made me realize that I needed to talk about Elon Musk, the universe’s answer to ‘What would happen if Tony Stark were a real person?’ Musk embodies many of the ideals behind Geekquinox, so let’s discuss what the non-nerd media isn’t getting about Tesla, Musk and innovation as a whole.

First, let’s put ourselves in the shoes of the average guy in 2018: he’s struggling. He’s aware of the challenges facing life on planet Earth. Plus, he knows the increasing disparity between the needs of the many, and the needs of those in power. He’s rightly asking, where is all of this taking us? When will it start to get better?

Enter Elon Musk. Like Tony Stark, he’s been a maverick his entire career, disrupting industry after industry. Long before we knew what hyperlocal media was, Elon Musk gave us Zip2. Long before we understood the implications of e-commerce banking, Musk gave us Paypal. Any time institutions said ‘you can’t do that,’ Musk’s response was: “Hold my beer.”

Now flash forward to 2018. Tesla production, making cars people buy in California in the 21st century, it’s a tough nut to crack. It involves work, innovation and persistance. Wall Street starts acting like a spoiled teenager, and Big Daddy Musk is like “Uh, yah … no.”

Good for him! In the movies, we champion a maverick. Think about how crazy Tony Stark seemed to be in Iron Man in 2008 when he announced, ‘no more weapons.’ In the movie, as in reality (both including Jim Cramer, like the line between movies and reality isn’t blurry enough), the stock market reacted wildly to his announcement. We didn’t care. We loved that a powerful guy was willing to stand up for what is right. Why would you be surprised that we don’t care about Tesla’s stock price, either?

Let me clue you in: you don’t have a clue. Between Michelle Wolf calling the media out, and Elon Musk not caring if you buy his stock, it’s a heapin’ helping of justiceporn to anyone who despairs of the dystopian status quo.

Here’s another pro-tip – Musk knows you won’t get it. Like every great innovator, he’s prepared to be misunderstood. If you couldn’t understand why SpaceX was important in 2001, why would he bother trying to impress you in 2018? This guy is changing the world. This guy is saving the world. Musk makes things happen, while Wall Street wonders what happened.

In a way, it reminds me of a grandma trying to backseat drive her son. Everyone knows grandma can’t drive herself, but she yaks and complains because she wants everyone to pay attention to her. At some point, someone’s going to tell her: If Grandma don’t like how daddy drives, there’s plenty of room on the Senior Trolley. That’s what Elon Musk just did to the media.

Musk is here to save the world, not the stock market. He’s a geek, and for once in your life you’re dealing with a geek who doesn’t care what you think. If you aren’t willing to come along for the ride, then please make room for another passenger. It’s a positively refreshing response in an increasingly craven world, where the priorities of few override the needs of many. 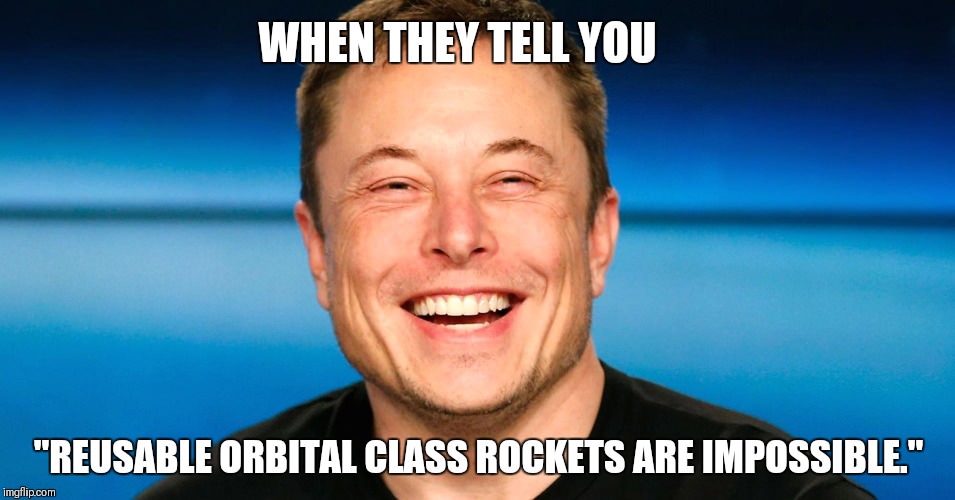 Good for him, I say. Power is taken, not given. Musk’s comments send a very clear message to those that think human innovation and progress are only seen through the lens of a stock price. Those people are wrong, and it takes a guy like Elon Musk to point it out. Only a person at that level has the ability to say: “I don’t have to play your game. I can succeed without you.”

Elon is keeping his geek hand strong. More power to him.