Return to Part One …

Continuing this discussion about building audiences. All artists are entrepreneurs, and all entrepreneurs are artists. Real artists ship. The game of professional creativity was never for the faint of heart. This blog series is simply about accepting the art and process of building an audience. It’s just as necessary to authors as a copy of The Elements of Style. You’ll never be in a place where you can afford to only listen to your inner creative voice. Audience building is integral to the Author Trip, full stop.

So let’s continue that discussion. Keep in mind, though, that it takes much persistent and gentle attention to build an audience. You need to understand the mechanics, but you’ll still need to apply them and everyone does this in their own way. Just like our matchstick Minas Tirith, you’ll be working at the micro level while being painfully aware of the macro. You’ll push through the ambiguity and doubt with a blind faith that your effort will lead you somewhere. After all, if you don’t believe in yourself, why should we believe in you? Let’s now consider some more ideas about audience building:

Have Something to Say

If the market for something to believe in is endless, so is the audience for something to say. Where some people look at media as a minefield to be navigated, I draw upon my geek experience and say ‘this is a system to be hacked.’ There’s no reason you or I can’t figure out what the Kardashians and the Honey Boo-Boo’s do by pure animal instinct. They have a unique perspective and they’re not afraid to share it. Your job is to do the same without being a narcissistic sociopath.

People get confused as to what this means and they try to fake their way through it. I keep seeing blog posts where authors and creators confuse quantity for quality with content directly out of the Tony Robbins / Napoleon Hill playbook. There’s nothing wrong with either of those two gentleman, but they already have the market cornered on semi-obvious non-ecumenical life advice. You have to sing in your own voice. That means that what you say must be relevant. Be valid, be authentic, be interesting. That leads me to my next point …

Want an audience? It really comes down to “can you share something interesting with me before anyone else?” Now some people take this to mean that that they’re supposed to be the front door of your life. This is a mistake. Know how irritating it is to be presented with an app that calls itself ‘a new way to discover content on the Internet?’ 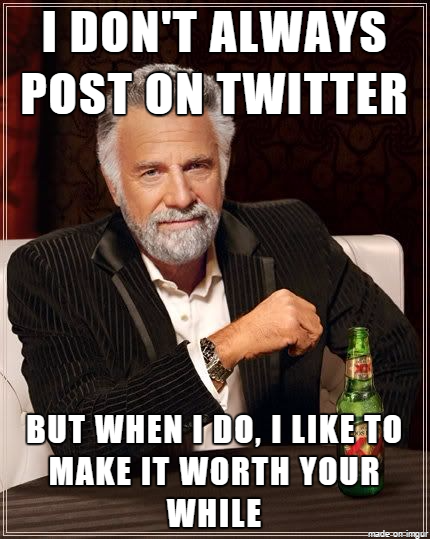 It’s like that. I’m not the gatekeeper of you. There are a million other places to learn about sci-fi. All I can do is share what I learn about my genre and try to be as relevant as possible to the people that matter.

I curate a number of different sci-fi and geek news aggregators and share things I think are interesting. It’s not an exact science and it requires some careful, constant attention to avoid the bugaboos of spamnews that so many public websites are fond of pumping out. No, I’m not interested in your PR-as-news-story. I’m interested in what is happening in the world of science fiction. So are many other people. We don’t have time for anything else.

Do your audience feel like you’re there for them? Do they feel like you care? Are you the absentee father of the audience, showing up from time to time to remind us that you exist, or do you actually spend time with them? I don’t know about you, but I’m interacting with people several times a day every day. It’s a job, you have to put the hours in.

But how do you do that as a busy author? That leads me to the next point …

Use Your Powers for Good

Yes, you’re going to use some automated tools in your audience building. It’s natural. Some people can afford to hire a social media team, but we are not those people. There are a ton of automated tools out there. You already know about them, I’m sure, but I want to challenge you to see beyond them. If you want to build a real, organic and loyal audience, you have to use automated tools very judiciously if you use them at all.

Here’s why: there are literally thousands of “how to build an audience” resources on the Internet.

Every one of them has the sociopathic feel of a pick-up artist book. I come away from them needing to take a very long, hot shower. They make me feel dirty and I don’t like the idea that I’m manipulating people. Most of those ‘audience building’ posts are counter-productive for authors anyway. Here’s why:

This blog post was aimed at intelligent authors who write books for intelligent people. That’s the audience I’m going after, that’s who I think / assume / hope you are. So why would I be dumb enough to think that you’re going to fall into the trap of being manipulated by me? It’s silly. My hope is to find people smart enough to like my sci-fi but too dumb to realize that I’m using cheap marketing gimmicks. That’s a very narrow demographic of people. Let me sum it up by saying this: You might as well use your audience-building powers for good, because you’re going to suck if you try to use them for evil.

I’m going to stop here because this is a digest of what I’ve learned so far. I’m sure I have more to figure out and I bet someone on the Internet will be quick to tell me what it is. Audience building isn’t an exact science. It never will be. As a geek, sometimes I’m guilty of trying to this effort into a boolean IF THEN ELSE statement so that I can return to the business of telling stories. I get called out on that. When that happens, I try to let my humanity come out. I find a way to laugh it off and learn. I kill the old, stale posts and leave the relevant stuff alive  … I do that religiously on Twitter, Reddit and Imgur.

But at the end of the day, all I’m trying to do is build my Minas Tirith out of matchsticks. That’s all I want. I’m hoping some day to step back and look at the audience I’ve built and go ‘wow!’ At the same time, I’m hoping to have stories that make them go ‘wow!’ too.