I don’t have HBO, but I’m reading all the reviews about Westworld and they prove an important point. Sci-fi has a love/hate relationship with story tropes. You know what they are, even if you don’t know the word:

Above all, a trope is a convention. It can be a plot trick, a setup, a narrative structure, a character type, a linguistic idiom… you know it when you see it. Tropes are not inherently disruptive to a story; however, when the trope itself becomes intrusive, distracting the viewer rather than serving as shorthand, it has become a cliché.

The mechanics of storytelling require, nay demand, that we use tropes in sci-fi … if for nothing else, it gives our readers a mental baseline for the universe that we’re building. Good storytellers know how to play with tropes in a way that won’t distract the reader (i.e. “The Princess Bride,” or any Pixar film).  Bad storytellers leave us angry enough to steal hubcaps.

Many of Michael Chricton’s novels fall in the latter category, I’m sorry to say. Hear me out: I’ve read all of them so I some freeness of speech to use on this. Almost every single one of his books is an attempt to celebrate the trope of ‘technology gone amok.’ You see the pattern over and over again in Jurassic Park, Swarm, The Terminal Man and (to a lesser extent) Andromeda Strain. If Westworld is going the way that reviewers say that it is, then I’ll be happy to skip it and here’s why: The ‘crazy tech goes crazy’ trope has become distracting for me.

Not only that, the ‘one sane expert that nobody listens to’ trope needs to go as well. It was interesting in Jaws, but it’s positively boring in Jurassic World. I went along for the ride as a starry-eyed teen when Jurassic Park opened in 1994. Now that I’m a jade-eyed middle-aged man, I expect the story to mature along with me. No multi-billion-dollar theme park and its associated corporate leadership would be dumb enough to expose themselves to such a massive liability. I mean, even if the CEO is crazy, her insurance people aren’t.

I’ll stop there: I’m not telling you anything you don’t already know. The point is that for storytellers, the takeaway is ‘avoid distracting tropes.’ Don’t try to be so original that nobody understands you. Don’t try to be so relatable that we’re at home tweeting ‘Richard Dreyfuss did it better forty years ago.’ Nobody wins when geeks start fighting.

I’m going to propose a theory and you’re invited to comment. When using tropes, storytellers should neither avoid them nor drown in them. Let them be like the seasoning on top of your steak, not a replacement for beef. Westworld has an opportunity to contribute to the rich, original sci-fi that we’re seeing elsewhere in the universe. Don’t blow it. 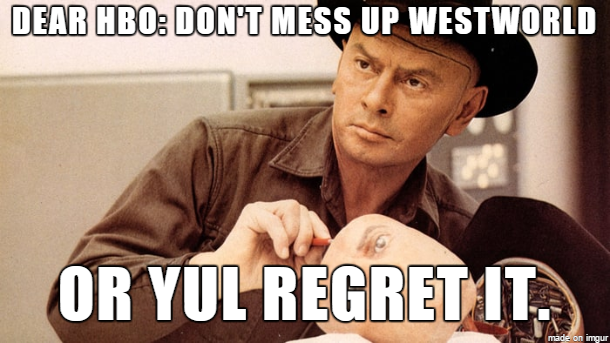